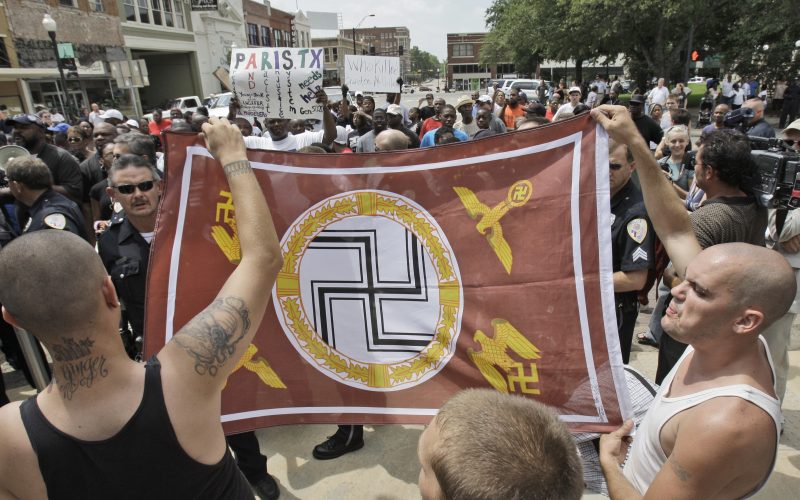 With police between them, white supremacists hold up a Nazi flag and yell at protesters marching on the town square in Paris, Texas, Tuesday July 21, 2009. (AP Photo/LM Otero)

Since its founding in the 1980s, the Aryan Brotherhood of Texas is believed to have committed at least 100 murders. Reigning over the prison gang was James “Skitz” Sampsell – the prize that the Justice Department hoped to bag during a years-long investigation. Dallas Morning News reporter Scott Farwell joins us to talk about how the woman closest to Sampsell ultimately brought him down – the subject of his seven-part series “My Aryan Princess.”

“Anybody who knows anything about prison understands it is racially polarized environment. And I believe that’s where it begins. I don’t think that most folks who join the Brotherhood are born racist. I don’t think anybody is really is. It’s an act of self-preservation. They pull together as a way to navigate the system and to get through it. The thing that’s different about the Aryan Brotherhood of Texas is that you take a commitment for life, and so whenever you parole when you eventually get out, you’re obligated to continue to work for and be loyal to the Aryan Brotherhood. And that’s where this group’s activity really starts to criminalize the world the rest of us live in.”