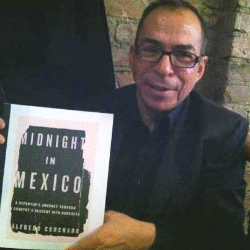 Hour 1:           How has the Mexican drug war affected those who claim both countries separated by the border? We’ll talk this hour with Alfredo Corchado, Mexico bureau chief for The Dallas Morning News. He’s reported from the trenches of corruption and violence for both the paper and his new book “Midnight in Mexico: A Reporter’s Journey Through a Country’s Descent into Darkness” (The Penguin Press, 2013). Corchado will speak at SMU’s Meadows Museum this evening at 6:30 in a joint program from The Dallas Morning News and SMU’s Tower Center for Political Studies. He’ll also address the World Affairs Council of Dallas/Fort Worth at 9:30 a.m. Saturday at the Warwick Melrose Hotel in Dallas.