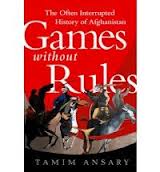 Hour 2:           What’s the real story of the Afghan people – their culture, dreams, and the lives they’ve lived in spite of the repeated military incursions of other countries, including the Soviet Union and the United States? We’ll talk this hour with Tamim Ansary, whose new book is “Games without Rules: The Often-Interrupted History of Afghanistan” (PublicAffairs, 2012).